Lessons from doing an illustrated social history of Heffers of Cambridge

I don’t claim to be an expert on doing social history, or any sort of history, and I did have some terrific help with aspects of the Heffers project. My aim in this series of blog posts is to reflect on the experience and hopefully, by doing so, share some useful lessons for anyone who wishes to undertake a social history. I’d also love to hear from anyone who has advice to share, as this experience has left me wanting to do more, and I have a lot to learn!

The first post, Possession is a delicate issue tackled the tricky issue of having a personal connection with the topic of the research, and what to do if you find yourself being told what to write!

In this second post, I refer to the various networks and places that enabled me to reach many people who were willing to share their memories of the firm. I also refer to some of the sources for printed and digital materials, and will be expanding on exactly what I used in a later post. Links to all the networks and sources are provided, plus one or two publications written by authors whom I was fortunate enough to meet during the project.

Lesson number 2: Connecting up and creating a conversation

I may originate from Cambridge but having lived and worked in Norfolk until relatively recently, I had no network as such in the area, apart from family friends. Eve Stafford, who is featured in the book, was the first family friend to have a conversation recorded about her time at Heffers. Eve then facilitated my introduction to Heffers retirees, Marion & Dudley Davenport, Peggy Green and Audrey Coleman, who all have stories in the book.

It didn’t take long of course to identify other effective ways to reach those with memories of Heffers and start a wider conversation. On 23rd January 2016, Chris Elliott published a plea for stories with my contact details in the Cambridge News Memories section. Also, in January, I emailed Chris Jakes at the Cambridgeshire Collection at the Central Library, declaring my intention to carry out some desk research there. Chris responded with very useful and specific information on what the Collection held about the firm and the bookselling trade. Meanwhile, Robert Webb (who’s father worked for Heffers and who worked for the firm himself) found Becky Proctor (running the Mill Road History Project at that time), who suggested I put a plea via the Cambridge in the Good Ol Days Facebook Group. Robert Webb also contacted Fonz Chamberlain, the Cambridge Historian, who writes about Cambridge history and who owns a lot of memorabilia.

As it turned out, both Chris Jakes and Becky Proctor contributed stories for the book (Becky worked as a bookseller at Heffers in the early 1990s). The Facebook Group, run by Derek Smiley, was a great way to reach people with memories of Heffers. It really helped to have something interesting to say about the topic when exchanging thoughts on Facebook. This is where a personal connection or some local knowledge can be useful. Sharing memories, even brief reflections, is a great way to get a conversation going. It’s important to post regularly, whilst at the same time, not making a nuisance of oneself.

I wanted people to understand my motivation for writing the book, and to appreciate that I too, shared their enthusiasm and interest in the topic. To that end, I had already written about my interest in Heffers in my own blog, as early as February 2014, in Choosing books, living life. In fact, it was through this post that I met Robert Webb who must have been keeping an eye out for references to Heffers, as he contacted me after having seen the post. My next reference to Heffers was in Heffers & E.M. Forster, libraries, books & a Del Boy moment, followed by Heffers and the elusive bust, This book is about Heffers, Portrait of a bookseller: the pacifist, and Mr Reuben, Penguin Books and Lady Chatterley. I regularly shared the blog posts via Facebook and Twitter and made some really useful connections in doing so. Bookseller, Claire Brown, got in touch via my website (Claire’s stories are in the book) and I made a useful connection with Dr Samantha Rayner at University College London via Twitter. Samantha kindly facilitated my access to the Penguin Archive at the University of Bristol, and I’m planning to do a talk on Heffers for her Masters students in early 2017.

Whenever I refer to Heffers on Twitter, I use a hashtag. Over the past year, I found that if you googled Heffers or Heffers of Cambridge, images that I had shared, including the book cover of ‘This book is about Heffers’, which we had designed very early on (I shall be writing about the book layout and design later in this series), were fairly prominent. Along with images of large ruminants…

On 2nd February I attended the launch at Heffers of The Promise by Alison Bruce. I had met Alison a few months earlier when she kindly gave a talk at a writing group meeting that I had co-convened in our village. Alison, whose relationship with Heffers is shared in the book, invited me to attend her launch and it was there that I introduced myself to David Robinson (manager of Heffers), bookseller Richard Reynolds and retired bookseller Clive Cornell, who had kindly responded to the Cambridge News Memories plea. I subsequently had a meeting with David and Richard at the shop to tell them about my plans, and to ask if they had anything that may be useful. It turns out they did, including twenty years worth of staff newsletters, the Heffers publishing diaries and other fascinating memorabilia. Much later, in April, I attended another book launch for Timed Out by Barbara Lorna Hudson. Kate Fleet at Heffers had given Barbara my contact details, as she had worked at Heffers as a student in the early 1960s. I attended the launch, bought the book and not only enjoyed it but have retained my contact with Barbara who, as I learned later, was embarking on a second career as a fiction writer after working as an Oxford academic.

Also, in February I emailed the Cambridge University Alumni Office, asking for stories. By then I had written an Advance Information Sheet, which provided a useful summary of the proposed book. I received a swift response and the Alumni team used social media to reach out to Cambridge alumni all over the world. And I emailed Mike Petty, renowned local historian, and he not only agreed to meet up for a chat over coffee but also sent a list of useful references from his own ‘Chronicle of Cambridge News’, a terrific digital database of Cambridge events and stories.

Whilst virtual communication via Facebook and Twitter is great, never underestimate the value of getting together face-to-face. A pivotal moment in the Heffers project was a memory café at the Museum of Cambridge, on Friday 26th February. The Museum, located near the city centre, provides a tangible sense of place and plays a vital role in bringing people together for exchange and reflection. At this event I met members of the Heffer family and Heffers staff, past and present. David Robinson had always wanted to meet the Heffer family, and this was his chance, also. I brought posters and materials to the café and we had a small display. People like to look at photographs and memorabilia, which can of course trigger memories. Others also brought artefacts, including William Heffer who brought the original lease on the Petty Cury bookshop from 1896 –how exciting!

Hilary Cox-Condron at the Museum, made a terrific six-minute film of the memory café, starring Bunty Heffer, now aged 96 years. I was impressed with how relatively easy it was for Hilary to create the film on her mobile phone and I’m planning to use film much more in 2017 to share stories and images from my research and from Gottahavebooks publications.

Early on in the project, having received a communication from Kate Fleet, Heffer’s very enterprising Events Manager, asking if I would be interested in launching the book at Heffers, I had an opportunity to fix a publication date. Thus, I duly agreed with Kate we would launch the book at Heffers on 10th November 2016.

Now I had a DEADLINE.

Better get on with collecting and recording the stories.

How I did that is the topic of the next blog post. 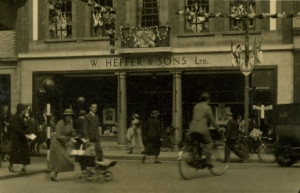